A couple months ago, I started working out.

Now I realize this isn’t that big of a deal for the athletic type people who actually enjoy working out, but I am just not one of those people.

When I got married, my metabolism, who has always been a faithful friend, came to a screeching halt.  I had a doctor’s appointment a couple of weeks after our one year wedding anniversary, and you can imagine my surprise to learn I had gained seventeen pounds in my first year of marriage.  Apparently being in love makes you fat.  This was a shock to me, because even if we did own a scale at home, I had no idea where it was at and never used it, so I was slightly oblivious to this increase in number.

I made a resolve to start working out and eating better, but that only lasted about three days.  After all, I’m 5’10 on a short day, so I reasoned with myself that those extra 17 pounds spread out quite evenly and were hardly noticeable.  And my husband still loved me and promised he didn’t notice anything different, so I didn’t see the point in sacrificing my love for chips and salsa to choke down salads.

So for a few months, I literally did nothing different to change my eating and exercise habits, until one day some of my friends got the bright idea that it would be super fun to start working out together at 6 o’clock in the morning!  Nothing sounded more terrible to me, but because I get major FOMO over these things, I agreed to join in. And so the working out began.  And to be honest with you, I hated it. Who in their right mind sets an alarm for 5:30am to willingly subject themselves to planks, burpees, squats, and lunges?  Crazy people, that’s who.  But we stuck with it, and nearly 4 months later, me and my faithful friend and workout partner Kyndall are still going at it.  Every morning at 5:30am when my alarm goes off, I think to myself “this is the dumbest idea anyone has ever had” but an hour and a half later when I am driving home, covered in sweat and endorphins, I think to myself “this is so worth it.”

And to be honest with you, I still hate working out.  I really get zero enjoyment out of it.  But I stick with it because I know it is worth it.  I don’t want to wake up in twenty years and realize I have no control over my health, so I am choosing the hard thing now because I know it will be worth it later.

I want to live a life of choosing to do hard things because they are worth doing.

It is hard to put over half of your income every single month toward paying off student loans, but it is worth doing to eventually live a debt free life.

It is hard not to have sex when you are dating and engaged, but it is so worth it to walk in purity and honor God with your relationship.

It is hard to to sacrifice your time, money, effort, and energy to serve the church and people, but it is worth it to give all you have to advance the kingdom of God.

It is hard to confess sin, but it is worth it to walk in the light.

Jesus told his disciples that they must deny themselves, take up their cross, and follow Him.  I bet that was hard.  But it was worth it.

At the end of my life, I don’t want to look back and see a trail of taking the easy way out for the sake of convenience, where I just half-heartedly lived life and got by comfortably.  I want to choose the best thing, which may be the hardest thing, but after counting the cost, jumping in head first, because it will be worth it.

Indeed, I count everything as loss because of the surpassing worth of knowing Christ Jesus my Lord. For his sake I have suffered the loss of all things and count them as rubbish, in order that I may gain Christ. Philippians 3:8 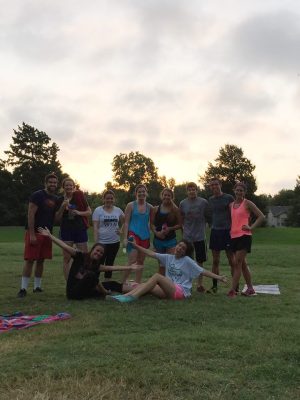 One thought on “Do Hard Things”