When James and I were engaged to be married, a wise friend told me “the biggest problems in your first year of marriage will either revolve around money or sex.” I, of course, was optimistic and thought we would rock both and never fight ever (LOL), so when we were standing in Half Price Books on our honeymoon arguing over whether or not we should buy the $89 worth of books that someone who will go unnamed had picked out, I concluded my friend was indeed correct and that money would be our issue.  And it sure was.

James and I are different in many areas, and the way we viewed and dealt with money was no exception.  We had different backgrounds, philosophies, and ideas of what the purpose of money was and what we were to do with it as a married couple.

In my mind, money was to be used to purchase the bare necessities required for survival, and the rest was to be put straight into a savings account.  In my single days, I took great pride in spending less than $30 a week at the grocery store (you better believe all that food was off-brand), and I had absolutely no shame in being “that girl” who, when out to eat with friends, would fill up on water and rolls, which enabled me to take my $7 meal home in a to-go box in order to stretch it out for the next three days. It brought me much angst and grief to spend money on anything that I thought would be a waste.  It’s safe to say I lean toward the extreme of frugality.

James, on the other hand, viewed money as an opportunity to purchase things to enrich his life.  He works hard for his money, therefore he wants to be able to spend it as he pleases.  I vividly remember one time, while we were dating and driving somewhere, he stopped at Academy and bought a pair of athletic shorts for $24 for no other reason than he liked them and simply wanted to.  I literally could not believe it.  I spent the rest of the day dumbfounded and trying to understand why he would buy another pair of athletic shorts when he was wearing perfectly good ones ON HIS BODY.  For James, money was simply just an avenue and tool for fun.

As you can probably imagine, these clashing philosophies created much conflict in our early days of marriage.  I worked hard to tighten up his spending, and he worked hard to lighten me up…well in all areas of life.  This all came to a head about three months in when he came home from work carrying a Walmart bag with a $6 neon shirt inside.  That $6 neon shirt sparked one of the biggest fights of our marriage.  I was livid he carelessly spent money on something we didn’t need, and he felt like he had no freedom to spend the money he worked hard for.  Six dollars.  After the blow up cooled, we decided we needed help.  Our church was about to start a Financial Peace University class, so we signed up the very next day.

FPU was super helpful for us because it validated our struggles and helped us understand that neither one of us were wrong, we are just different.  The class gave us a language and terminology to work through the issues we were facing, and helped us to develop a plan that would unite us.  There were many useful ideologies and principles we learned in the class, and I want to share a few that were most transformative for us:

It’s a little embarrassing now to admit this, but neither one of us were regularly giving to our church (or anywhere) when we got married.  The first thing we changed was to set up recurring giving to our church, operating under the mindset that God owns all things are we are stewards to what He has given us, so we want to give to Him and His church first.

Create and stick to a budget

This was really huge.  It’s funny to me now, but we realized we had no idea how much money we actually brought home and where it was going every month. We paid bills and the rest of it just ended up somewhere.  We started creating a budget to determine where our money was going to go.  We still do it now.  Every. single. month.  Having and maintaining a budget is effective and lifesaving for many reasons:

As a newly married couple, we had tens of thousands of dollars of student loans looming over our heads.  Instead of paying the minimum payment every month and chugging slowly toward the projected 2043 payoff date, we decided to go all in and knock it out as fast as we could.  More months than not, over half of our paychecks were sent to dear ol Sallie Mae.  We didn’t buy fancy things or go on extravagant vacations, and became pros in creating ways to have “free fun” – meaning lots of volleyball and game nights.  But it was well worth it, because two years later, we paid those loans off in their entirety and are living 100% debt free.

I say with all sincerity that working together and applying the principles we learned in that class significantly changed our lives as a married couple. That fight over the $6 neon Walmart shirt a little over two years ago was the last time we fought over money.  No joke.  We don’t argue about our money, we don’t worry about it, and we hardly even talk about it anymore.  The budget and guidelines we have agreed on quietly play their role in the background and free us to live our lives and focus our time and energy on things we actually care about.  We have learned to effectively manage this area of our life, and it has brought so much unity and freedom between us.  James is starting seminary this fall, and we are paying for it in cash…because we are able to.  Not because we make loads of money (neither one of us are in rich people professions ;)) but because we work hard to manage what money we do have in the very best way we can, and that hard work pays off.  All the sacrifices we made early on proved to be well worth it. 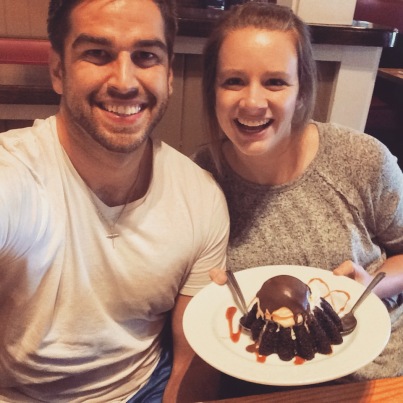 When we submitted the final payment on our student loans, I expected to have feelings of euphoria and great accomplishment, but it ended up being rather anti-climactic.  But that’s okay. I am proud of the discipline God has given us to stay the course and pursue a debt free life. But that’s really just the beginning of our story with money. We are now in a place where we are free to give more and invest more monetarily in the Kingdom of Jesus. So I believe the work we have to get done is now ready and in front of us. I can’t wait.

One thought on “We are debt free!”